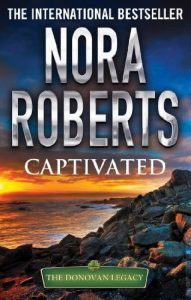 Nash Kirkland doesn't believe in magic. But when he hires self-proclaimed witch Morgana Donovan as a great 'resource' for his new supernatural film, he suddenly finds himself falling under her spell. Nash has never trusted his feelings, but the alluring Morgana has released an irresistible passion in the usually cool-headed screenwriter. The question is - are those feelings real, or are they just some conjurer's trick?

Morgana has her own doubts - despite her strong feelings for Nash. She can understand his scepticism about her powers. But can an ordinary man really handle falling in love with a rather extraordinary woman?

Captivated can be read as a spellbinding standalone novel. It is also the first book in The Donovan Legacy, which features cousins Morgana, Sebastian, Anastasia and Liam. The series continues with Entranced, Charmed and Enchanted - all now available as eBooks for the first time.

Includes a preview of Entranced.